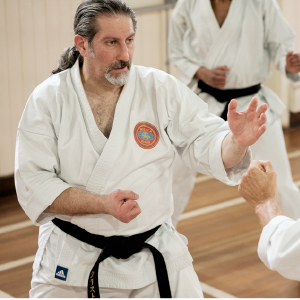 I was born in Kumasi in Ghana when my family was living in West Africa due to my father’s employment being based there. I started my martial arts training in 1973 when I was 12 years old and living in Nigeria. I was first taught Judo at a local club in the state of Sokoto by a black belt 2nd Dan English man who also worked there. This was the Bruce Lee era!  His films were a great inspiration!  I am proud to say that I was very influenced by this talented and charismatic martial artist!  But I wanted to do more than Judo, I was interested in learning Karate!

Where we lived at that time there was a Japanese petroleum company called ‘’CHIODA’’ and my father was a good friend of one of the senior engineers there.  A group of his colleagues were practicing and training in JKA Shotokan Karate!  I was invited to go along and started training, getting ‘’kicked and punched’ around’ (just joking!). This was very hard and it was real!  If you didn’t try to block you got hit!  That’s how it was at that time! Eventually I was able to block sometimes and punch back too!  Also during that time during the school holidays, my elder brother began teaching me Taekwon-Do. He had just received his 1st Dan black belt in Taekwon-Do, where he was training at his school on the Isle of Wight in England. His lessons were great, especially the kicking techniques. In addition, at this time I had an opportunity to study Kobudo (Sai, Nunchaku, Bo and Tonfa) from a Nigerian friend of my father who was also a 1st Dan black belt in Judo from my old Judo club. I started to build up a big collection of martial art books on every Karate style I could find including other styles like Aikido, Western Boxing and Chinese Martial Arts like Wing Chun and Tai Chi Chuan. and of course on Bruce Lee’s system/concepts.  I became very obsessed!  During that time I never received any gradings as there were no official organisations in Nigeria then, but that didn’t matter! All that was important was the training & learning as much as I could!

In 1975, I moved to England to attend boarding school.  I continued to train and practice by myself with all the ‘’things’’ I had learned before apart from Judo (which I later regretted).  As I was in boarding school, again I was unable to join any official club or organisation.  I finished secondary school in 1981. At last I was now able to look for a Karate club to join.  By coincidence, my younger brother, who was an undergraduate at Surrey University, had begun training at the Surrey University Shotokan Karate club which was then affiliated to the KUGB/JKA.  Enoeda Sensei, Kawasoe Sensei, Tomita Sensei and Ohta Sensei regularly took courses and gradings there. My younger brother had told me that I if I wanted to learn proper Karate these were the Sensei to learn from!  At least one of them!  In the same year I joined a Shotokan Karate club in Crystal Palace, run by Rod De Silva Sensei, a great teacher who had also trained with and recommended Enoeda Sensei and Kawasoe Sensei very highly!  So, I went along to Kawasoe Sensei’s Dojo, then at Earls Court in London, and was truly hooked!  I was so impressed with this great Sensei!  That moment in 1982 was the beginning of my training with the KUGB/JKA.

I continued training with Kawasoe Sensei and also started to train with Enoeda Sensei and his assistant, Ohta Sensei at the famous Martial Street Dojo, Enoeda Sensei’s own club in London.  I recall once meeting the National Japanese Sumo Team who had come to London for an event.  They came straight to Enoeda Sensei’s dojo to show their respects to him and I happened to be there that evening after training with Sensei.  It was an experience that that I would always remember with fondness as it showed in what high regard he was held by the Japanese martial arts world.

By 1986, I passed Shodan grading with Enoeda Sensei at Heriot Watt University in Scotland, Kawasoe Sensei was also there!  The same year, with the support of the KUGB’s club affiliation officer, Bob Poynton Sensei, I opened my first club, the South Croydon SKC, affiliated to the KUGB/JKA.  I started to teach three times a week, Tuesdays, Thursdays and Saturdays, and trained with either Enoeda Sensei or Kawasoe Sensei on Mondays, Wednesdays & Fridays!

Also during this period I found a Kendo Dojo in East Croydon and started to train there on Sundays!  I practiced Kendo for four years. I loved it just as much as I loved Karate.  For me they complimented each other.  As Kawasoe Sensei had said once, ‘’Karate/Kendo same, they are all Budo’’!   Unfortunately, the club closed as I was due to take my Shodan grading in Kendo!  I had to stop as there were no other clubs nearby, the nearest being in Brighton.

I continued with Karate, starting to compete from 1982 at the KUGB/JKA Southern Regional Championships and of course at the famous KUGB/JKA Nationals.  I continued competing there until 1988.  I also continued to attend the courses at the Heriot Watt University in Scotland until the late 80s, training with the likes of other top Sensei, such as Tsuyama, Kawasoe, Osaka and Naito to name but a few!  By 1988, I passed Nidan grading with Enoeda Sensei at one of his regional courses in Slough, England.  I continued to train and teach as I did before but not training as much with Kawasoe Sensei.  In 1993 I passed Sandan grading, again with Enoeda Sensei and Sherry Sensei of the KUGB at the famous Crystal Palace Course.  Until 2002 I attended nearly all the Crystal Palace Courses, training with other top Sensei including Kase, Asai, Tanaka and Yahara. Also training alongside some of the top British Sensei was inspirational!   These were all unforgettable times and experiences and I learned so much from these great masters.

Sadly, some of them are no longer with us.  In March 2003 Enoeda Sensei passed away after losing the fight to cancer.  To me he was a father figure that I had grown to love and respect.  This unexpected loss at the age of 67 was a huge shock to the karate fraternity in the UK and the rest of the world. Following the death of Enoeda Sensei it was very sad for me to see the KUGB leave the JKA as I had great respect for all the senior British Sensei. This was announced in 2003 at the Enoeda Sensei Memorial Course at Crystal Palace in south London. I continued to train and teach at clubs affiliated to the JKAE/JKA for the next 11 years.

In 2007, I passed my Yondan grading with Ueki Sensei, the current Chief Instructor of the JKA.  I taught at Kingston University SKC and opened a club in Esher, Surrey after I moved to live near Hampton Court.

Soon after I was involved in setting up Ethos Shotokan Karate Centre, a group of clubs in and around the London area.  I was instrumental in establishing and running the clubs as well as being Chief Instructor from 2009 until 2014.  During this time I was elected to the JKAE Executive Committee and held the position of London & South East Regional Officer.  I remained with the JKA until 2014, re-competing at the JKAE Nationals until 2010 and finally retiring from competition that year.

2013 was a great turning point in my Karate career.  I met Mitsuoka Sensei and was invited to attend the open WSKF Course in Slough, England. There I was welcomed and introduced to Kasuya Sensei, the World Chief Instructor of the WSKF, The World Shotokan Karate Federation which was founded in 1990.

At the course I was very impressed with Kasuya Sensei’s teaching.  His charisma, ability and technique were exceptional and made a huge impression on me.  Kasuya Sensei’s brilliant Multi-directional and spinning movements. This was the way I wanted to practice Karate and after much thought and deliberation I decided I wanted to follow Kasuya Sensei.  I resigned from the JKAE/JKA at the end of 2014.

In January 2015 I set up the Axios Shotokan Karate Centre and affiliated it to WSKF HQ.  By this time I had also obtained my Godan with Kasuya Sensei as well as my ‘B’ Licence as instructor, examiner  and judge. I was now officially certificated by WSKF HQ and Kasuya Sensei to carry out all Kyu gradings and grade up to and including Shodan gradings.  The majority of my previous students from the various JKAE clubs decided to follow me to the WSKF.

From 2015 onwards Mitsuoka Sensei, myself and other senior Instructors in England who had also joined WSKF felt it was now time to get together and form WSKF England rather that affiliating our individual clubs to WSKF HQ.  We discussed this with Kasuya Sensei and he was happy to give his approval.

In November 2016 we had our first WSKF England National Championship, which was a great success.  In April 2017 we renewed our affiliation to WSKF HQ as WSKF England, with Mitsuoka Sensei becoming our first Chief Instructor.  I am a senior member of the Technical and Executive Committees.

Axios Shotokan Karate Centre now has established clubs in Esher, Hounslow and Chertsey.  I also teach at a private school in Ascot and give private one-to-one lessons by appointment.  After over forty years of being involved in Karate I am proud to say that my passion for this martial art has not dimmed!  I am still obsessed!