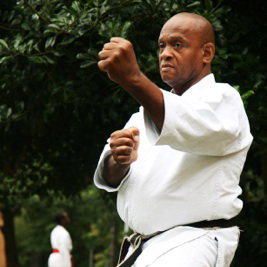 Sensei Don Morrison began studyingIshin Ryu Karate in 1971 (a style formed by Ticki Donovan).  After training for a couple of years, Sensei Don then switched to the similar style of karate called Kyokushinkai.

In 1976, Sensei Don joined the Thames Karate Association (TKA) where he began his Journey in Shotokan Karate. He later trained under Keinsuke Enoeda Sensei who came over from Japan in the 1960s to establish Shotokan Karate in the United Kingdom. Sensei Don then founded the ‘Seishin Juku Shotokan Karate Club’ in 1980.

Sensei Don has always been known for his powerful gyaku-tsuki (reverse punch) which has won him many victories in Kumite at competitions over a span of 20 years. He is also known for his intense and challenging training regime. His methods have proved to be successful through his patience, discipline and dedication towards his students.