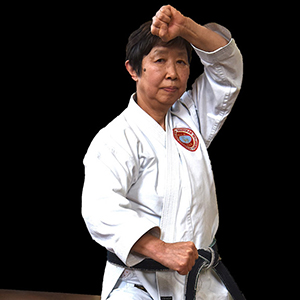 Tomiko Mitsuoka was born in Japan in 1948 and started the study of Shotokan Karate(JKA) in 1966 at the age of 18 years,

My initial purpose was to learn self defence as I was employed in a department store working long, late hours, I remember that it was not popular for ladies to study martial arts at that time and found it very difficult to join a dojo until my cousin who was a Karate instructor introduced me to his sensei, Hirano Sensei one of the original students of Master Funakoshi and one of the co-founders of the JKA.

Karate training during this period was different from now, it was very strict without much explanation, just following instructions and training very hard.

The lesson was 75% Kihon and 25% Kata and Kumite.  However, “I do try and incorporate some of the old ways with the new ways in order to keep training more interesting in my dojo”.

I travelled to England in 1971 to study English and returned to Japan in 1973. I joined  Kanazawa Sensei’s Yotsuya Dojo where    I trained three times a week under Seto Sensei, at the time a Nidan (Seto Sensei not to be confused with his senior brother who won the JKA championship)

Additionally I attended the Hoitsugan Dojo once a month where Nakayama and Kanazawa Sensei shared an apartment. The apartment had a basement where they had a small dojo. Some JKA instructors who had been abroad teaching Karate and returned to Japan also attended the dojo to train and exchange experiences under Kanazawa Sensei’s instruction, “I was a 1st Dan at the time and learned all the Shotokan Kata from him.

After giving birth to my first son in 1978 and now a 4th Dan, I returned to training. By this time Kanazawa Sensei and his dojo had already left the JKA and formed the SKI.  Kasuya Sensei was assisting with the training at the SKI Honbu Dojo and their relationship continued to grow into that of Sempai and Kohai.

In 1990 Kasuya Sensei and Master Kamiyanagi called a meeting to discuss various matters and I and about 20 Japanese blackbelts and instructors attended. The decision was taken at this meeting to form the WSKF.

Sadly, we lost Master Kamiyanagi last year after our 25th  anniversary and he cannot see the continuing growth of WSKF. Today we have over 200 dojo’s across the world and student numbers continue to grow.