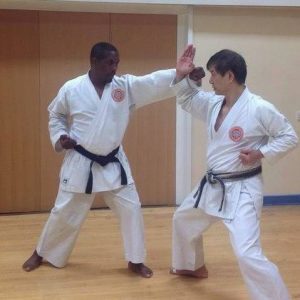 I was born in 1956 in a small village in Dominica in the West Indies and moved to England in 1965. At age 16, in 1972, I was invited to the Red Sun Karate Club, where my karate journey began. I later joined Preston Karate Club under Sensei Andy Sherry.

I took my 1st Dan with Sensei Keinosuke Enoeda, 8th Dan in 1976 (The Japan Karate Association).

I won gold medals in kumite at the 2001 British Shotokan Karate Association Championship in Blackpool, the 2002 Funakoshi Shotokan tournament in Las Vegas, and the 2004 European Shotokan Challenge Cup in Holland.

In 2006, at The JSKA World Shotokan Karate Championships in New York. I competed in two events, winning a gold medal in kumite and a bronze medal in the showcase event.

I currently run one club, Preston Shotokan Karate Club, with 15 students, including 6 black belts. In 2020, the club joined WSKF England, led by Sensei Tomiko Mitsuoka, 8th Dan and Sensei Hotoshi Kasuya, 9th Dan. I am also currently setting up another club in the same area. I look forward to having the opportunity for my clubs to grow and participate in WSKF events.